There are a lot of choices in the market today when shopping for RAM, ranging from the standard sticks without any modifications to stylish “gaming” RAM with heatsinks and even RAM with LEDs. Apart from the obvious form factor choice of DIMM or SO-DIMM, there are a lot of characteristics of RAM which may confuse a lot of people and this article may help you decide which one is best for you.

The most common benchmark used for comparing RAM modules is the speed it runs at, this is typically measured in Mhz. The frequency RAM runs at determines how fast it can process data, or transfer bandwidth. Higher speed generally means better RAM but that is not the only thing you should look for when choosing your memory, there are other factors which can affect the overall performance of RAM. CAS Latency is often referred to as “CL”, the CAS latency is essentially the time it takes to execute a command once it has been ordered which is measured in cycles. Unlike speed, a lower CAS latency is better as there is less time wasted when processing data. Sometimes you will see the value as CL15 but other times it may be listed as a 15-15-15-35, the first value will be the CAS latency while the others will represent the tRCD, tRP and tRAS values which you don’t really need to worry about too much. You can read more about how to filter RAM by CAS Latency and MHz here.

Correlation between speed and latency

Increasing the speed of which memory runs at will also typically increase the CAS latency so it may not be worthwhile going for the fastest RAM as it will result in more cycles to complete a process. But what is the trade-off and is there a certain speed / CAS latency you should aim for? The CAS latency is measured in clock cycles but does not take into account of the duration of the clock cycles so using just the CAS latency as a benchmark will get you nowhere. We can use the formula - CAS latency divided by the real speed of RAM x 1000 to give us the “true latency” of any given RAM measured in ns. Since we are using double data rate memory the real speed will be halved so we end up with this formula.

It is not always about performance

Anandtech has done a benchmark with WinRAR showing how many seconds it takes to compress files using different types of RAM. As you can see from the graph, with CAS latency labelled on the x-axis and memory speed on the y-axis, there is a 10% increase in speed going from a value-oriented 1600MHz CL11 to 1600Mhz CL7.

The second table gives you an idea of how the best performing combination stands up to the competition with the multiplicative value being how much longer it takes compared to the fastest time.

So while there are performance gains to be had using high speed and low latency modules, someone looking for a bank-for-buck upgrade should probably focus their efforts elsewhere.

So with performance out of the way, what else is there to consider? Well for many people, visual appeal is still probably the key deciding factor when it comes to choosing RAM. Nobody likes having those standard green memory sticks in their computer when there are much better-looking models from G.Skill, Corsair and Kingston HyperX.

So in the end, most people should perhaps just choose the RAM which looks best to them or meets their budget requirements. But, if you are an enthusiast looking to get the best possible performance and don’t mind paying a price premium, you can, of course, opt for the higher end models. 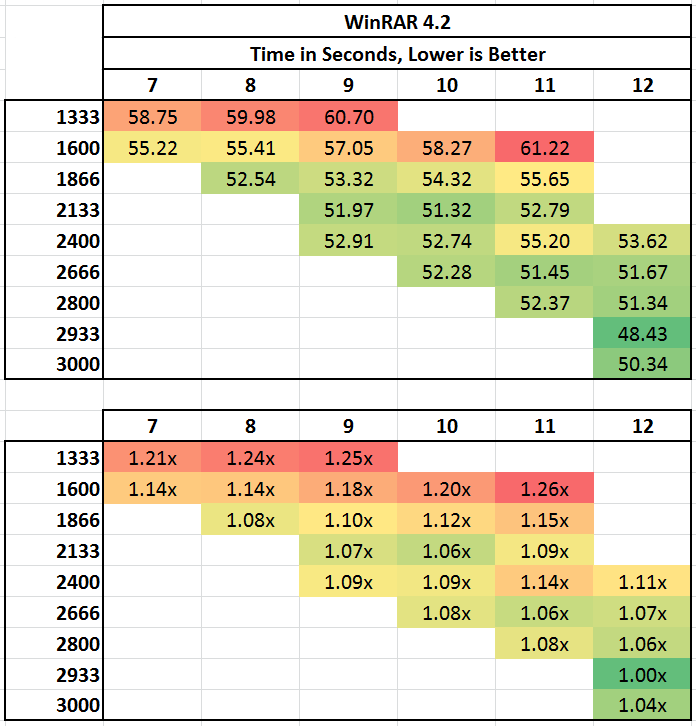