There is a new option for those on the hunt for a great VR headset, and it’s available right now in New Zealand - the new HTC Vive Cosmos Elite is now available without the extras, as a stand-alone VR headset. The Vive Cosmos Elite has it’s own inside-out tracking system, able to follow the motion of our heads to get directional input via an array of special cameras on the headset itself.

This makes it perfect for those keen on some seated virtual reality, in games like the new Star Wars: Squadrons for example, which puts us into the cockpit of a starfighter for the core gameplay.

With the new VIVE Cosmos Elite, you’ll experience the virtual world through new eyes, with a beautiful 2880 x 1700 combined pixel resolution - that’s a whopping 88% increase over the original VIVE, great news for anyone who had a play with the first wave of VR headsets and wanted more detail. The increase in subpixels and the use of real RGB panels improve the lens clarity too. All-new LCD panels reduce the distance between pixels, minimising the screen-door effect.

The Cosmos Elite now delivers high-quality stereo audio integrated into on-ear, form-fitting headphones so users can experience great sound and comfort during extended VR adventures, and the fit is great.

Improvements to the headset design continue with the new Cosmos Elite giving users the ability to switch back and forth freely from reality and game world with its flip-up headset design. A crown fit makes putting on the headset quick and easy. It suits a wide range of face shapes, vision types, and even fits over glasses. 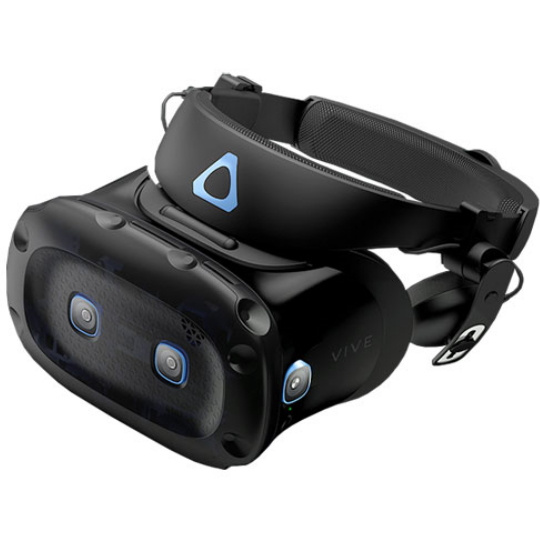 Should your VR adventure begin with the stand-alone VIVE Cosmos, but later develop into a full-fledged hunger for everything that full room virtual reality has to offer, you can purchase a range of accessories to make your setup complete.

For most, this starts with hand controllers, then, when the taste for hand to hand combat demands added precision, adding base stations to improve tracking. The next evolution is usually about adding wireless support to your VR, and this is easier than even thanks to the HTC Vive wireless kits now being compatible with the Cosmos Elite too! 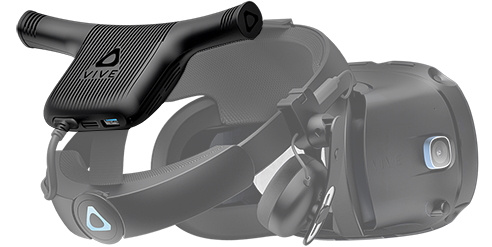 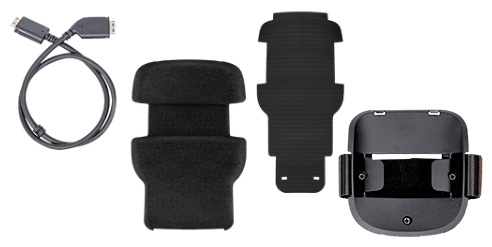 Specific kits are available that attach the wireless adaptors to headsets

It’s a two-part solution, and you’ll need to be running your HTC Vive Cosmos Elite from a desktop PC that has a spare PCIe slot to install a WiFi adaptor inside, this technology in only compatible with Intel based systems right now.

There are two product kits that need to be purchased, namely the HTC Vive Wireless Adaptor (which includes the special PCIe card) and the HTC Vive Cosmos Elite Wireless Attachment Kit.

The wireless kit does exactly what you’d expect it too, letting us move with freedom thanks to very powerful visual and audio transmission at 60GHz via the special Intel® WiGig connection. The Adapter Clip for the HTC VIVE Cosmos is a component which allows you to attach the HTC VIVE's Wireless Adapter to your VR headset. Simply attach the Wireless Adapter to your VIVE Cosmos VR headset using the easy-to-use Adapter Clip and you're ready to immerse yourself in other worlds without being restricted by unwanted wires and connections. This attachment kit comes with a custom cradle, supported connection cable, and extended head cushion.

Looking for a great Virtual Reality headset with high-quality visuals, sound and a comfortable fit? Look for the VIVE COSMOS ELITE in the HTC Vive Store today!

I just got a new headset only. I am not able to set it up. When I install I don't get any options for no controls. I can skip it, but that decision seems to hunt me. Tried to view a film in VIVE but only a grey screen appeared. Can anyone direct me to setup instructions for the Cosmos-Elite-VR-New-Headset-Only-Option?

There are two parts to set up, start with www.vive.com/setup/ and this will guide you through VIVE + STEAM installation too. The 'long stare method' is how to select menu items with no controllers at all, use this to launch into your racing or flight sim then just use the wheel/stick once you’re in. There are voice commands too, but I have not used them much.

The intel only limitation is a bit of a shame