Should you RAID your SSDs?

SATA 3 has been around for a couple of years now with a maximum capable speed of 6Gbit/s which may seem quite fast but most SSDs on the market nowadays can almost match that speed. This leads us to the question, how do we go faster? SATA 4 is an option, but SATA 3 is at a point where increasing the speeds will require a tremendous increase in power making it no longer efficient for storage. PCI Express is what most next generation storage have turned to as it offers unprecedented speeds with the Intel 750 NVME SSD capable of read speeds up to 2500MB/s which is almost 5 times as fast as your standard SSDs. There is also the OCZ RevoDrive which is capable of read and write speeds of up to 1700MB/s but these drives are mainly used by professionals.  The most common way to increase storage speed is by using RAID, which allows more than one drive to be connected in an array to either increase performance, offer redundancy or both.

RAID (Redundant Array of Independent Disks) is when 2 or more drives are synced together to achieve faster speeds or better protection for your data. There are multiple standards of RAID with the main ones being RAID 0 and RAID 1. RAID 0 is referred to as striping, which writes data on two drives resulting in improved performance as the drives can read and write simultaneously. The problem with RAID 0 is that if one of the drives fails, you lose all your data as half of the data used for your files will be gone. RAID 1 is referred to as mirroring, where data is written on both drives at the same time giving you two copies of your data so if one drive fails, you still have the other drive as backup, however the speed at which you write data will be much slower compared to RAID 0. RAID 10 is a combination of RAID 0 and RAID 1, which requires 4 drives but only performs roughly as fast as a two disk RAID 0 array, striping data on two drives while backing up the other two drives. RAID 5 is very flexible and requires a minimum of 3 drives, striping data along all 3 along with a “parity” that is used to rebuild data if one drive fails. For RAID 5 any of the drives can fail and there will be enough information across the other drives to rebuild the whole array, however this takes a long time, especially if you are using an on-board RAID controller. If you are planning to use RAID 5 it is best to go for a dedicated RAID controller as it speeds up the rebuilding process significantly.

How to get started with RAID

If you are after insane read and write speeds, RAID 0 will theoretically double the performance of your drive which is great for content creation and productivity. PCWorld have done a benchmark using the Intel 730 SSD drives showing what speeds they are capable of – see below: 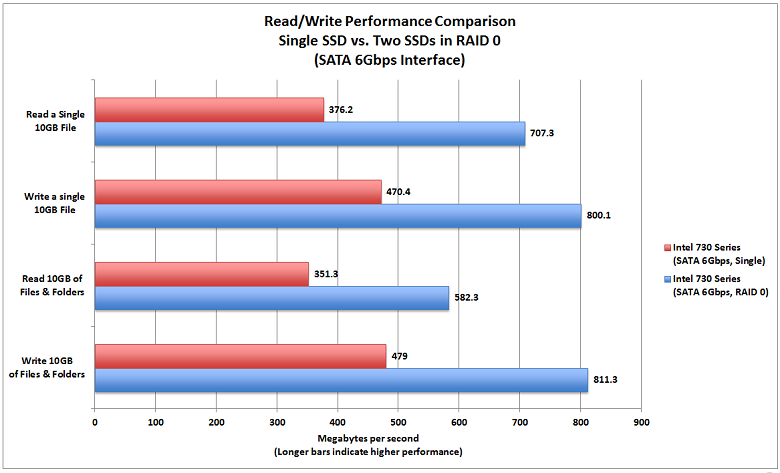 We now know that RAID 0 can significantly improve your data storage speeds and increase productivity for content creators and media users alike. You can use RAID 0 to almost double your storage performance, however keep in mind that the data failure rate will be doubled as you have two drives working together as one. You can consider using RAID 1 for extra redundancy but won’t benefit from a speed increase of RAID 0. RAID 10 will give you speed and redundancy but will require a minimum of 4 drives. If you want to make the move to a RAID array, and do not have a RAID controller, check our motherboards section to find one with an on board controller, or you can opt for a PCIE RAID controller such as the STLab A-520. For the latest hot deals on the industry’s leading solid state drives, check out our SSD category page.