If you’re someone who regularly spends hours wearing a pair of headphones or a gaming headset, you’ll know how much weight and pressure they can put on your head and neck. You may have found yourself wondering - if only there was a way to get surround sound audio, while still being able to use a mic, without the discomfort of a headset…

Cue the Panasonic SoundSlayer SC-GN01, a “Neck Speaker” that takes all of the weight off your head and neck and places it onto the typically much more sturdy shoulder area. Now this may sound a bit gimmicky, so what does the SoundSlayer offer; Surround Sound without the need for an expensive speaker setup or headphones, speakers that are also capable of voice chat, and they don’t put pressure on your head after long periods.

While neck speakers aren’t exactly a new phenomenon, they are far from an oversaturated market, and you can’t find any others with the same focus on gaming that the SoundSlayer boasts. Having been designed by Panasonic in collaboration with the sound team from Final Fantasy XIV Online, you can trust that this device will perform when it comes to games, but just how well, and what else can you use it for? After a few days of heavy use, let's dig in.

The SoundSlayer comes in a suitably gamer looking box, yet sports an understated, all black design. Its exterior is comprised of a cloth net speaker covering, a solid feeling plastic underneath, and a section of rubber that holds the two speakers together. This bit of rubber stops any hard materials from digging into the back of your neck and allows for the SoundSlayer to conform to different people’s builds. Featuring 4 buttons (Mic Mute, Sound Mute, Sound Mode Changer, and a volume rocker) as well as an AUX port, it looks easy to use, and sure enough, as soon as it was plugged into my desktop, I was away. The rubber connector and the cloth net speaker on the Panasonic SoundSlayer. 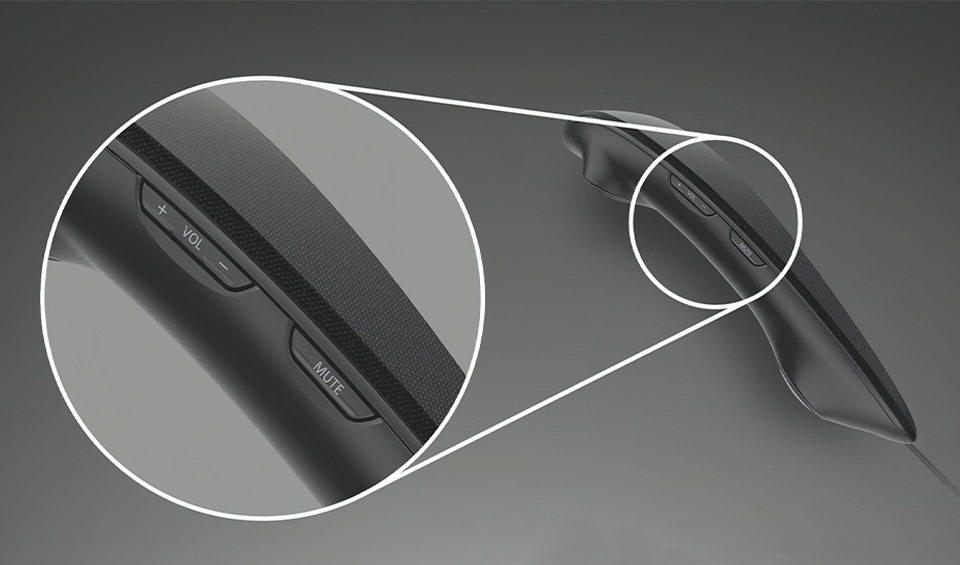 A closeup of the Volume rocker and Mute buttons on the Panasonic SoundSlayer. A closeup of the Mic Mute and Sound mode buttons, as well as the AUX port on the Panasonic SoundSlayer.

Now, how do they sound is the most important question! Well it depends a bit on the mode you choose. The SoundSlayer feature 3 different gaming modes:
RPG - Specially made for Final Fantasy XIV Online, but works well for other RPGs
FPS - Perfect for pinpointing gunfire, and hearing footsteps in first and third-person shooters
Voice - This enhances audio that sounds like human speech and ensures it is clear

And for those less passionate about gaming, or that just enjoy other media too, there are also Cinema, Music, and Stereo options.

The Sound mode button on the SoundSlayer. The inner workings of the Panasonic SoundSlayer.

Overall, this leads to sound quality that is pretty great, you definitely lose some of the range that comes with more expensive headphone options, and sometimes you do lose a bit of audio detail if you have any background noise. Though this is well worth the experience of forgetting you’re in-game, I would say that the SoundSlayer has given me some of the deepest immersion I’ve experienced in flat screen gaming.

I was surprised at how well they performed when gaming to say the least! You can wear them, as advertised, for long periods of time without your head overheating or feeling pinched, especially nice as we move into the warmer months. It also performed exceptionally with voice chat, I thought for sure there would be some audio bleed through of my game audio or others speaking in my party chats, there was none. There’s even a nifty little feature where a red light pops on at the tip of the left speaker when your mic is muted, I almost feel this should be standard. I’ve spent far too much time talking on mute while gaming. I tried the SoundSlayer out with Discord, Xbox Party Chat, and even Microsoft Teams, and it sounded accurate in all of them with just voice singing through crystal clear. While testing the SoundSlayer in the recently released ‘Back 4 Blood’, the review one of my fellow ‘Cleaners’ gave the mic quality was “If I hadn’t known you were using them (The SoundSlayer), I wouldn’t have been able to tell you weren’t using regular headphones”, which I think is pretty high praise for a first generation device of this kind.

The mic is positioned at the tip of the left speaker on the SoundSlayer.

I ran the speaker through its paces to see how well it performed across the board. The FPS mode allowed me to pinpoint the location of subtle sounds, and also gave enough gravity to the gunfire in Far Cry and Back 4 Blood. The RPG mode, although specifically designed for Final Fantasy XIV Online, still immersed me deeply in the worlds of Marvel's Avengers, and Voice mode ensured I could hear all of the important dialogue in Psychonauts 2.

I also gave it a go with Virtual Reality. I often struggle with wearing a pair of headphones over the top of my VR headset (I'm desperate to get the best audio I can), just because this adds extra weight and often can sit uncomfortably over the top and side straps of my device. The SoundSlayer fixed that, giving my neck a break and keeping me immersed. Trying them out in Lone Echo 2 with the RPG mode had me enthralled, and once again forgetting the SoundSlayer was even there. Noticing I’m wearing headphones often breaks my immersion, so this was a really pleasant surprise. The SoundSlayer also performed well in Star Wars: Squadrons, and Simulators like Dirt Rally 2.0, Assetto Corsa, and Microsoft Flight Sim.

Then I thought I’d see how versatile these puppies are, turns out it’s very. I’ve used them for Teams calls, listening to music, watching YouTube and movies, all of which sounded great, and all of them greatly benefiting from the immersive surround sound (aside from Teams, where Surround Sound doesn’t impact much naturally). In Teams, it felt more conversational because I wasn’t dealing with average sounding audio from a laptop, or noticing my noise-cancelling headphones resting on my head. While watching movies I experienced full surround sound without an expensive home speaker setup. Though unfortunately because they are wired, I was limited to watching either on my desktop or on my console with the SoundSlayer plugged into the controller and a powerbank, which was only a slight inconvenience and not noticeable once I got started.

Although neck speakers aren’t necessarily a new concept, it’s great to see Panasonic taking the idea into the gaming sphere. Gaming audio has been a pretty stagnant area for a while now, so innovation should be applauded. And for a first outing, I think Panasonic has done a fantastic job. Of course, there are a couple of areas that might improve in the next generation, hopefully a wireless model and maybe aiming for a broader range on the audio spectrum would be welcomed. Though it is understandable why they are missing on this first jaunt, with price and being lightweight a goal for Panasonic.

Now, who are these for? I think they’re a great surround sound option for those looking for gaming audio that need or want to be aware of their surroundings, especially if you are often home alone or have children/pets you want to be able to hear. They also work great if you are on your PC all day. Naturally, I've been working from home a lot more throughout this lockdown and have found myself reaching for the SoundSlayer over some of my other expensive headphone options, simply because of how easily I can forget they’re there. They’re flexible too, managing gaming, productivity with music in the background, virtual meetings, movies, and in-game chat all without a hitch.

If you are looking for more innovation, or plenty of other great products, check out the Panasonic Brand Store! Or check out the full range of Gaming Headsets today.