So what's so special about the SteelSeries PRIME series? Well, it's ambitiously chasing the best value in class for all new options, and doing rather well at it.

Starting with the three SteelSeries Prime Gaming Mouse options, named PRIME, PRIME+ and PRIME Wireless, there are a couple of less obvious differences to consider.

Looking closely at the SteelSeries PRIME+ Gaming Mouse we see this is the only mouse in the new range that features a secondary lift-off sensor - so what is a lift-off sensor and why would we want two?

Having a second sensor allows us gamers to adjust the lift-off distance, choosing when to stop and start tracking when we lift the mouse off our mouse pad. We can tweak this between 0.5mm-2mm, 0.5mm being the winner for those wanting the absolute minimum movement from a mouse jump, this, in turn, allows us to keep the cursor movement low for greater accuracy, but still able to physically move the mouse quickly then jump it back into position on our mousepad after our wide, rapid movement.

When it comes to tweaking these adjustments, the PRIME+ is the only mouse to feature an onboard OLED screen that can be used to easily see adjusted polling rate, CPI settings, lift-off distance, and more, on the mouse itself, without additional software.

CPI is another term that might be new to some, it's an acronym SteelSeries uses and it stands for Counts Per Inch. This specification is often known as DPI, or Dots Per Inch. With a CPI setting of 800, a one-inch movement of your mouse moves your cursor 800 pixels... and yes, we're still waiting for a metric version too :) All the new PRIME mice have a CPI max rating at 18000, and while it's unlikely we'd be want to play with such speeds, it's super useful when we're navigating the desktop, especially for those with multi-monitor setups, ultra-wide monitors and so on! 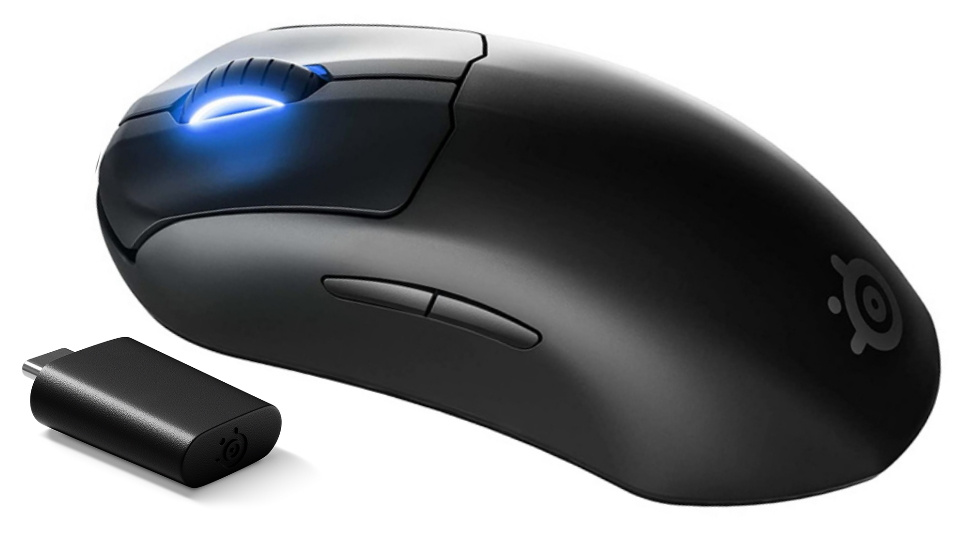 The SteelSeries PRIME Wireless Mouse uses a Type-C dongle for connection, and includes a USB Type-A convertor too

It's important to know that all PRIME Gaming Mice feature an exceptionally good primary sensor, with the PRIME and PRIME+ using the TrueMove PRO(+), and the PRIME Wireless getting the new TrueMove AIR.

A gaming mouse sensor is basically a camera, with a lens and body of hardware that handles capturing and processing for a massive number of images. A good sensor must capture a large number of images, a great sensor does this with higher quality.

Via SteelSeries: With the TrueMove Pro, SteelSeries significantly increased both the number of images and the quality of image that the sensor can capture. You never have to worry about inconsistencies from the sensor not keeping up, regardless of how fast your hand is moving the mouse. The mouse far exceeds the limits of human capabilities...unless you can somehow move your mouse over 11 meters in less than 1 second!

How serious? No joke, they've used Advanced high fidelity audio drivers with the same premium hardware and tuning from the Arctis Pro (I'll let you quickly google how expensive those are), calibrated for maximum detail separation at the highest levels of gameplay, so your ears can clearly identify directional cues, distance, and all the sounds in between.

The utterly premium speaker drivers with high-density magnets reproduce crystal clear audio up to 40,000 Hz, that's double the range of typical headsets, maybe a tad excessive though with the average human only hearing 20hz - 20000hz, so you'd actually have to be wearing the SteelSeries PRIME headset while running a YouTube Hz Hearing Scale Test video to see how good your hearing is to know for sure if this will benefit you.

The PRIME Gaming Headsets comfortable design is not a question though, the proven combination of lightweight aluminium alloy and strong steel construction for extreme durability without additional weight is a real winner seen across the full Arctis headset range, as well as various respectable competitors who have imitated this design.

The Arctis PRIME microphone uses the same bi-directional design used by aircraft carrier deck crews, so your voice comms will come through the team without issue. The air cups are somewhat shallow, but do a respectable job with noise isolation so hearing teammates isn't a problem either, great for that game in louder environments. This is important for the PRIME headset because it works with a single 3.5mm plug, and with that retractable microphone it's totally viable to make this your everyday gaming headset for PC at home, and Nintendo Switch or Smartphone when you're out and about.

Looking for awesome new gaming gear that won't break the bank? Check out the new PRIME range in the SteelSeries Store today!