If you're serious about vlogging, it’s time to stop using your phone camera and seriously look at upgrading your gear. Think about all the times you’ve judged a video on its video quality before its content. Hey, it’s okay, we’re visual creatures and we can’t help if we’re drawn to videos that are crisper and more polished. Even if you’re not vlogging for the views or followers, you’ll be thankful for your better quality videos when you look back on your memories later down the line. There are plenty of vlogging cameras that’ll take your content up a notch and we’ve got some recommendations.

You don’t need to spend thousands of dollars on a high-end camera to make amazing videos. You also don’t have to lug around heavy or bulky camera equipment to get cinematic shots. You’ll be surprised what some cameras are capable of for their reasonable prices and compact sizes. In this roundup, we’re going to help you find the best vlogging camera. Sony is well-known for their great mirrorless cameras and this particular one has been designed specifically with vlogging in mind. The Sony ZV-E10 mirrorless camera borrows some features from Sony’s ZV-1 compact vlogging camera (which I talk about later in this article) but offers so much more for those who need additional creative control. The ZV-E10 is a 24MP APS-C camera with interchangeable lenses, making it perfect for those who want to capture a variety of professional-looking shots. Wide-angle, close-ups, telephoto, and so on, you can all do it on this camera with a change of lens! It’s also capable of recording UHD 4K video up to 30p, Full HD recording at 120p, and stills shooting up to 11 fps.

The ZV-E10 features Sony’s latest phase-detect autofocus system which you’ll find extremely useful for both photo and video. You’ll get incredibly quick subject tracking, along with reliable eye, face, and head detect AF. It also has a time-lapse and slow-motion feature that lets you capture slow and quick footage without the need for post-process work.

While an external mic is the best way to achieve max quality with your vlogs, the ZV-E10’s microphone is capable of capturing pretty decent quality audio. It has a built-in directional three-capsule microphone. This camera is a great choice for those who want more creative control. If you want to incorporate more cinematic and artistic shots into your vlogs without switching cameras, this is the one for you!

If you’re all about action and adventure, the GoPro Hero 9 is what you need. While some people use the GoPro specifically for capturing action, it’s just as great as your everyday vlog camera. From its waterproof design to its incredible image stabilization, the GoPro Hero 9 is one of the most versatile vlogging cameras you’ll come across, so you’ll be equipped for great footage no matter what situation you’re in. One of the best things about it is that it’s super small and light, so you’ll have no issues carrying it around with you all day. Its small size is also a lot more discreet, perfect for anyone who’s a bit shy about vlogging in public.

Don’t let the small form-factor fool you, because the GoPro Hero9 is packed with plenty of impressive features. It’s capable of recording at 4K at 60fps and 5K at 30 fps, and a new sensor allows you to get 14.7MP grabs from 5k video, as well as take 20MP stills. It has Hypersmooth 3.0 video stabilisation, TimeWarp 3.0 for time-lapses, and more!

One massive perk is the addition of Mods, designed to make the Hero9 even more vlog-friendly. There’s a Media Mod that adds a directional mic as well as a 3.5mm external mic jack, an HDMI output, and two cold shoes. You can then add Display and Light mods to brighten your shots! You can expect new mods to appear over time too, such as the latest Max Lens Mod accessory that brings features like 360º horizon lock and an ultra-wide 155º Max SuperView mode. 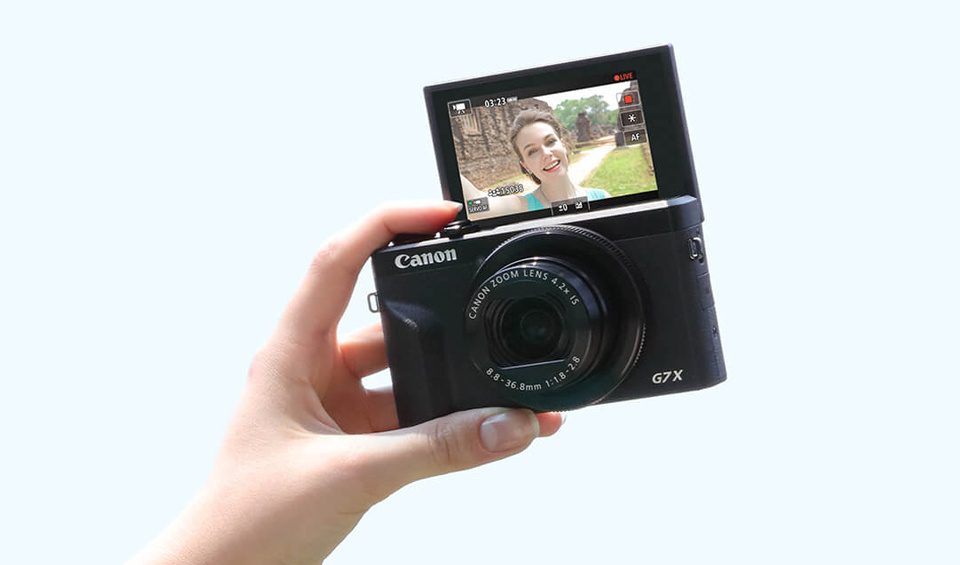 The Canon Powershot G7-X series has long been a popular vlogging camera amongst YouTubers. Of course, Canon took note and leaned into this, giving us the G7-X MK III. This compact camera sports a 24-100mm focal range lens with a wide f/1.8-2.8 aperture and 4.2x optical zoom, a 20.1 MP 1" Stacked CMOS sensor, and an excellent autofocus system, enabling it to produce fantastic footage. It’s capable of recording at 4K at 30p and Full HD at 120p with no crop. There’s also an option to extract high-quality stills from 4K footage which comes in handy for creating thumbnails. The tilt-up LCD screen is another handy feature that you’ll appreciate, so you can ensure you’re always looking your best.

The camera also comes with an external mic socket, a built-in ND filter (great for when shooting outdoors), and live video streaming support. It also supports vertical video capture which produces videos that are Facebook and Instagram-friendly. All in all, a reliable vlogging camera that’s nice and compact, and already trusted by many. It’s one of the cheaper options on this list, so it’s a fantastic choice if you’ve got a smaller budget but still want great quality vlog footage. 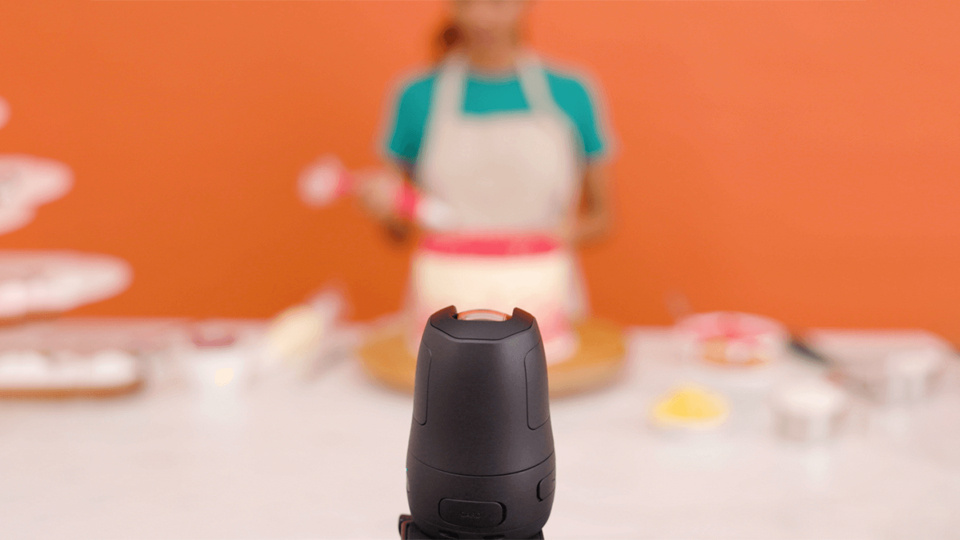 The Canon PowerShot PICK automatically tracks you to keep your actions in frame, while automatically adjusting composition and shots. The PICK can be used wirelessly through your phone, or even your PC, making it a great option for use as a webcam.

Do you like to move around your space while vlogging? It can be pretty challenging if you're animated to stay in frame, thankfully we have cameras like Canon's PowerShot PICK! This nifty camera is the ultimate vlogging companion, especially if you don't regularly have someone handy to help you film. The built-in automatic tracking makes sure you're in frame no matter whether you're doing a makeup tutorial, getting on the tools, cooking, or whatever else you're passionate about.

Thanks to voice-controlled commands, you can ask the PICK to take photos, start recording, change who it's focussing on and stop automatic shooting. It's also really portable thanks to its compact and lightweight design. It only weighs 170g, making it a fantastic companion for on the go filming! 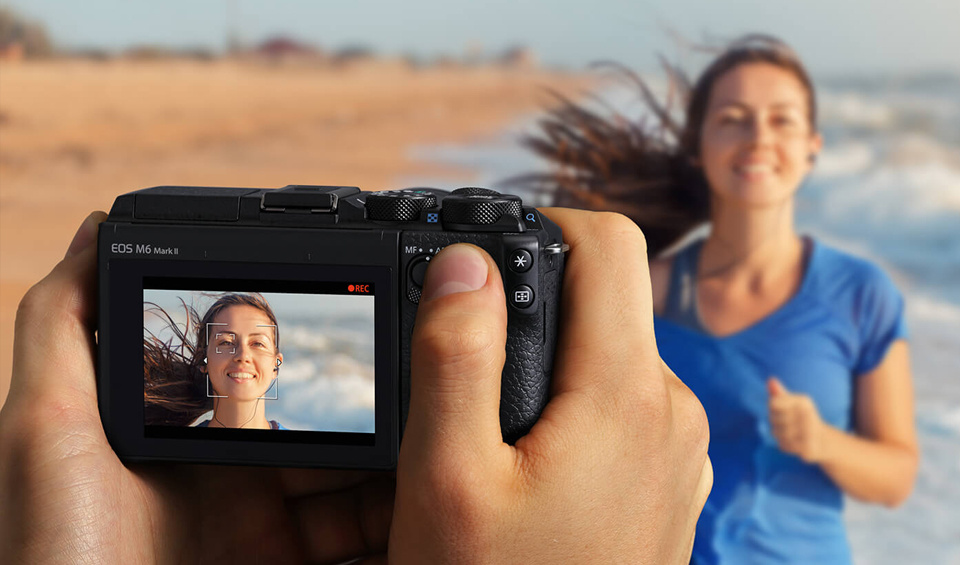 Canon has kicked their mid-range mirrorless camera game up a notch with the EOS M6 Mirrorless Camera MK II, and it’s a great choice for vloggers. It’s equipped with an impressive 32.5MP APS-C sensor and a DIGIC 8 processor that’ll allow you to maintain high resolution even when trimming a photo.

It’s not all about the photos though as the M6 Mark II does have some advanced video capabilities. It can shoot impressive uncropped 4K 30p video, and Full HD 120p high frame for slow-motion videos. Coupled with the camera's Dual Pixel CMOS autofocus, you'll get high-speed and high-precision focusing while you're vlogging. Something to keep in mind is that the M6 MK II has no in-body stabilisation so if your hands are particularly shaky, you might find that your vlogs are too. Otherwise, the Canon M6 MK II is a fantastic all-rounder camera, great for both photography and video!

Once you’ve got your vlogging camera sorted, you’ll need some accessories to pair it with. Two important accessories that’ll help greatly with the quality of your vlogs are a gimbal or tripod, and a microphone!

If you’re reading to step up your vlogging game, these cameras can really help you do so. Make sure you head over to PB Tech to check out the entire range of Cameras & Accessories!

What tools do I need when working with video?

Top Camera Drones for Beginners in 2022

Top Cameras for Beginners in 2022 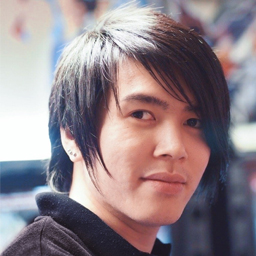