Smartphones are quickly replacing handheld consoles for gaming and it’s easy to see why. The best gaming smartphones in 2021 offer excellent screens and amazing power to deliver a quality gaming experience, as well as the practicalities of a normal smartphone. As processors get faster, GPUs become more powerful, and displays get sharper, the mobile gaming experience just keeps getting better. Leading titles like PUBG, Call of Duty Mobile, Genshin Impact, Minecraft, and the long-awaited Diablo Immortal show that developers are starting to take notice too. Not all smartphones are cut out for gaming though so to help you narrow down the selection, we’ve put together a list of some great gaming smartphones in 2021.

The ASUS ROG Phone 5 is the latest and most powerful incarnation of the world's most advanced gaming smartphone. Designed with gaming as the priority, the ROG 5 sports a gamer-esque design, and is packed full of incredible specs to take on just about any Android game, with enough power left over to future-proof it for some time.

The ROG Phone 5 series harnesses the massive power of the latest flagship Snapdragon 888, which packs industry-leading innovations in 5G, AI, gaming, and includes the latest and greatest Adreno 660 graphics. The premium Snapdragon Elite Gaming lets you harness the power of ultra-smooth play at the highest possible HDR quality levels, with desktop-level capabilities. Additionally, the ROG 5 has an eye-watering 16 GB of LPDDR5 RAM, which dramatically increases the overall gaming performance and takes the user experience to the next level.

The ASUS ROG 5 boasts a 144Hz AMOLED display – with a touch sampling rate of 300Hz – that delivers a super-smooth gaming experience, with an ultra-low touch latency. The screen itself is optimised for gaming in landscape mode, with a nicely sized at 6.7” with dual front-facing speakers which are among the best you’ll find on a smartphone. 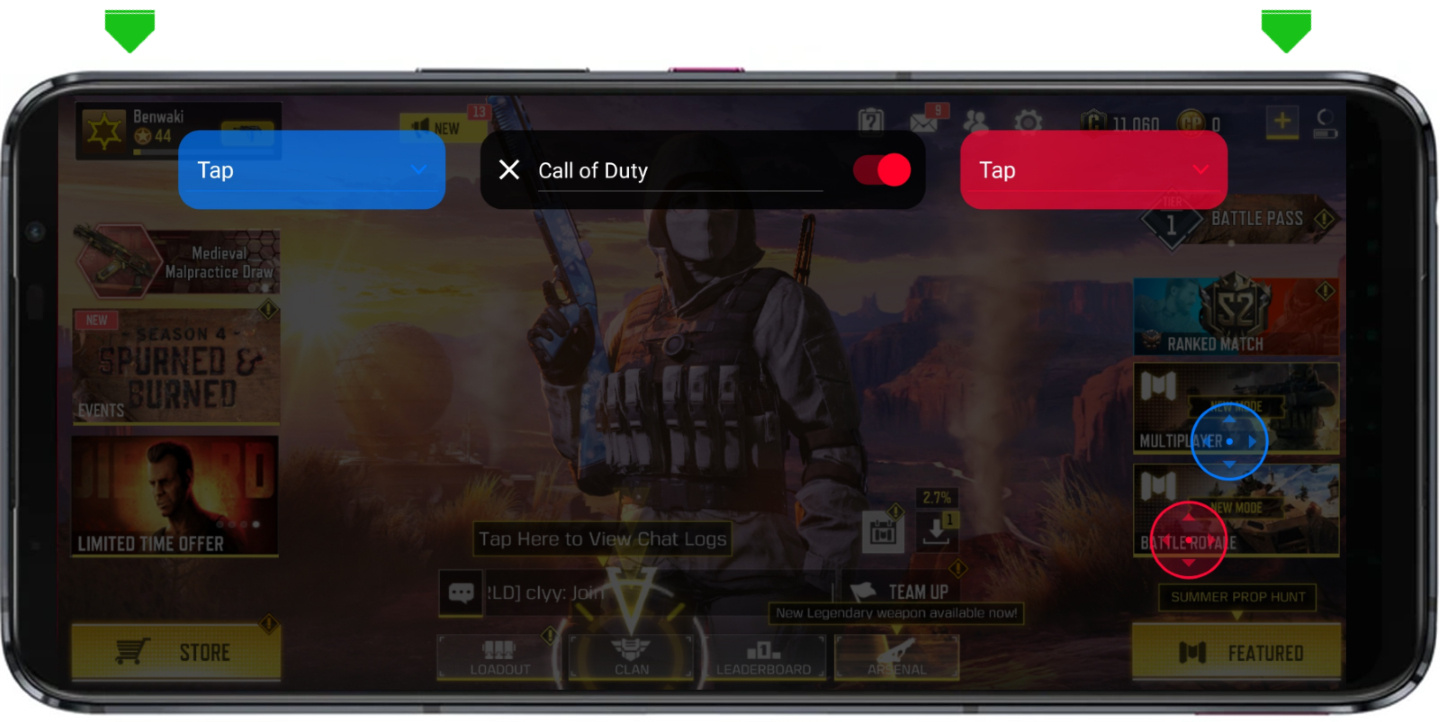 The built-in trigger buttons can't be seen, but with haptic feedback it doesn't matter. The configuration tool allows you to position each button exactly where needed for whatever game you want to play - and the ROG Phone 5 will save the setup you make for different games too, smartly loading each automatically so you can set and forget

ASUS ROG understands the need for tinkering with your setup as a gamer. ASUS’ Armory Crate app opens up a whole world of customisation, tweaking, and enhancements for your favourite games. Change display settings, graphics, touch sensitivity, network prioritisation, macros, and more, all on a per-game basis.

Adventure, first person shooter or fighting game - no matter which game type you want to play the ROG phone 5 is powerful enough to play it. I've uploaded these next screenshots at full resolution showing the in-game performance of the Asus ROG Phone 5 in Genshin Impact, Call of Duty Mobile and Mortal Combat so you'll be able to see how impressive the menu overlay options, and in-game FPS really is. It's also important to note I haven't activated the X mode toggle too, which can give this powerful phone even higher performance levels in exchange for high temps. Right now there are only a few games that make use of this, League of Legends Wild Rift at 120FPS on the ROG Phone 5 is a beautiful sight to behold though.

The ROG Phone 5 can display in-game stats for CPU usage, GPU usage, temperature and real-time FPS via a discreet overlay on the bottom of the screen while you play.

The Game Genie overlay offers a world of tools overlaid over any game – real-time system info, notification control, screen recording, multitasking, and much more at your fingertips. One special feature we love – a shortcut to Google tutorials and walkthroughs for the game you’re playing in a handy overlay. You can even deep-dive into advanced PC-like performance settings that would normally require modifying your device thanks to ASUS’ Hardcore Tuning. If you’re a keen-enough mobile gamer to want control over thermals, RAM, and the CPU scheduler plus per-core clock speeds – ROG Phone 5 is the mobile platform for you.

Swipe in from the left to see the Asus ROG Phone 5 full overlay, with meaningful settings to stop distractions, overclock and monitor with ease

The Asus ROG Phone 5 has hidden triggers like those on a game console controller, making it ideal for fast shooters such as Call of Duty Mobile

In Mortal Kombat the ROG Phone 5 can reach almost 144FPS!

With a monster 6,000mAh battery, the ASUS ROG Phone 5 will keep you gaming for longer. With a number of built-in software and power-saving mechanisms, as we talked about earlier, the ROG Phone 5 series is constantly optimising itself for the best power efficiency. Plus, with 65W charging, you won’t be out of action for too long when the battery does run dry, it even has a second USB Type-C port on the side so you can game in landscape while charging. If you’re looking for the ultimate gaming phone, the ASUS ROG Phone 5 offers the complete package for gamers, easily earning its spot at the top of this list.

If you’re looking for a smartphone that delivers for gaming but is also a fantastic all-around device, look no further than the Samsung Galaxy S21 Ultra! It’s Samsung’s top-of-the-line flagship making it one of the most well-rounded – and expensive – smartphones on the market right now, and with it comes a great gaming experience!

It sports the ultra-powerful Samsung Exynos 2100 processor, delivering a top-notch performance that’s perfect for both media and gaming. It also has an adaptive 120Hz refresh-rate display for smooth gameplay and an incredibly responsive screen. With the refresh rate adapting to what you’re viewing, the S21 Ultra preserves more battery life for the tasks you love.

It’s not just about the hardware though. The Samsung Galaxy S21 series include Samsung’s Game Launcher and Game Tools options which allow you to tweak performance and adjust settings in individual games. Features like Game Booster's Priority Mode can block calls and notifications while gaming to maximize performance. Optimised for Unity Engine, sophisticated AI monitors device usage and automatically adjusts settings for the best experience - regulating temperature, battery, and memory all while you play.

If the Samsung Galaxy S21 Ultra is out of your price range, any of the Samsung Galaxy S21 phones are great for gaming. If those are still too pricey, the Galaxy S20 FE is another great alternative at a much lower price point. A new release for New Zealand, the super-popular Galaxy S20 FE now comes with the coveted Snapdragon 865 processor and Adreno 650 graphics offers superb value while delivering on the all-important basics such as screen quality and performance. With a 120Hz display and the Snapdragon 865 processor on board, you’ll get an enjoyable gaming experience without breaking the bank.

When it comes to gaming on iOS, it doesn’t get any better than the iPhone 12 Pro Max. While iPhones generally aren’t built to sport a wealth of gaming-related features, the A14 Bionic chipset in the iPhone 12 Pro Max is faster than Qualcomm’s best equivalent, making it well-equipped to take on demanding games.

In addition to its powerful processor, the iPhone 12 Pro Max features a gorgeous Super Retina XDR display for an incredible visual experience while you game. With storage options of up to 512GB, you can also carry an entire library worth of games on a single device.

Where the iPhone 12 Pro Max falls short in the gaming department is that the refresh rate is capped at 60Hz. If you’re after ultra-smooth gameplay, you’ll get better on the Android rivals. However, if you’re a loyal iOs user or want access to exclusive titles in the Apple Arcade, this is something you’ll have to sacrifice.

Xiaomi’s latest flagship is the Mi 11 series and amongst the impressive specs, it offers almost everything you could possibly want from a gaming smartphone. The Mi 11 features a gorgeous 6.8” WQHD+ ultra-high-resolution display, with a refresh rate of up to 120Hz for a smooth and seamless gaming experience. It also has a 480Hz maximum touch sampling rate – Xiaomi’s fastest screen response speed to date. The screen responds to your actions faster than ever, putting you one step ahead when gaming. Xiaomi’s Game Turbo software gives you everything you’d expect in a flagship smartphone gaming experience. Notification control, high-performance mode, automatic screen, memory, and network optimisations.

In addition to ultra-smooth gameplay, the Mi 11 delivers on performance thanks to the flagship Qualcomm Snapdragon 888 processor. Built with 5nm process technology, it comes with a fully upgraded CPU, GPU, and AI performance, making it one of the strongest processors in the 5G era. All of this is backed by a 4,600mAh battery that’ll keep you juiced up for hours of gameplay. When it is time to recharge, a 30W charger will get the battery charged up in no time.

The Oppo Find X3 Pro is Oppo’s latest flagship smartphone and packs some impressive features into a flashy-looking device. The 6.7” AMOLED display with QHD+ has a 120Hz Dynamic Refresh Rate which seamlessly switches between 5Hz-120Hz depending on your activity - preserving battery power and ensuring stunningly smooth performance. Those serious about gaming will appreciate the O-Sync Display Hyper Response Engine which connects the screen with CPU the moment your finger makes contact, for an immediate response that makes gaming with Find X3 Pro fast, lag-free, and totally immersive. Add to the mix a powerful Snapdragon 888 processor and 12GB of RAM, and you’ve got a phone that can easily take on just about any game you choose. Plus, when it’s time to recharge, juice up super-fast wired or wirelessly with OPPO’s legendary VOOC fast-charging system.

If you’re looking for a great value gaming smartphone, the Mi 10T Pro is a fantastic option. The Mi 10T Pro is powered by Qualcomm’s Snapdragon 865 processor with 8GB of RAM. It features a 144Hz refresh rate that offers jitter-free usage and a super smooth gaming experience. In addition, the variable experience optimises the refresh rate to suit whatever process you’re running. This results in less power consumption which in addition to the beefy 5,000mAh of battery, means you can go for longer gaming sessions, and then get straight back into the game with 30W fast charging. Just like the Mi 11, the Mi 10T Pro is fully equipped with Xiaomi’s Game Turbo software suite to put your spin on your favourite games. The Mi 10T Pro is impressively equipped to take on your gaming needs without even breaking $800!

If gaming is a top priority for your next smartphone, these phones are well worth your consideration. For more options, check out NZ’s biggest range of smartphones at PB Tech!