This limited edition of the ROG Strix GeForce RTX 3090 features a stunning ice white colouring, so now we can finally build that ultra-high-end all white-themed gaming rig with the latest in graphics technology!

The shroud, fans, metal accents, and backplate have been carefully colour matched by the Asus team to give this graphics card a look like no other, and that’s on top of all the generational improvements to the ROG series.

Flipping the card around reveals more design improvements. A wide backplate vent and shortened PCB allows hot air to escape towards chassis exhaust fans instead of being recycled by the GPU’s circulating cooler design. A GPU bracket provides extra stability to the critical connection between die and heat spreader. The I/O bracket is made from stainless steel to protect ports and provide a more secure mount. It's large and power hungry, with a 2.9 slot design and 3x 8-pin power inputs required.

Being an Asus product, this eye-catching design combined with best in class components - such as top-shelf capacitors, chokes and MOSFETs that stand ready to effortlessly deliver hundreds of watts at a millisecond’s notice. 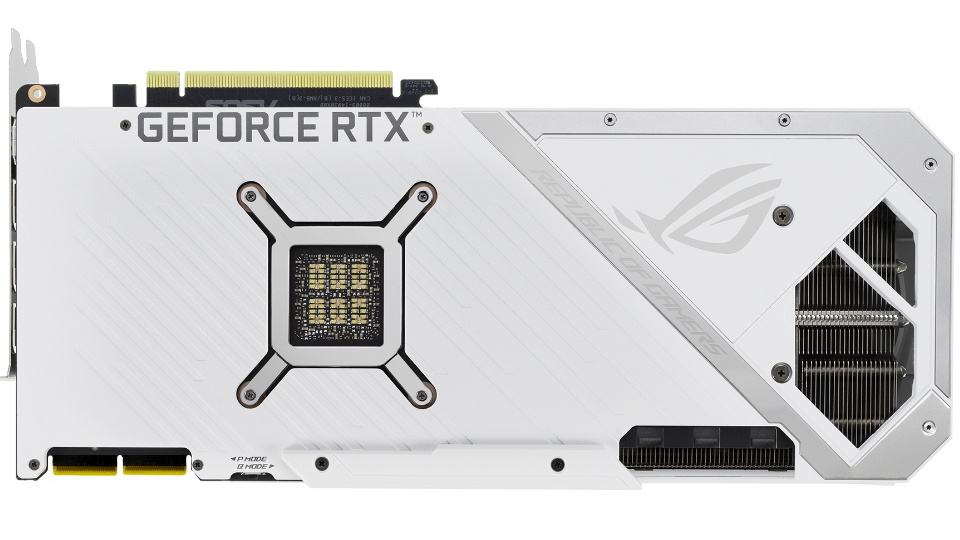 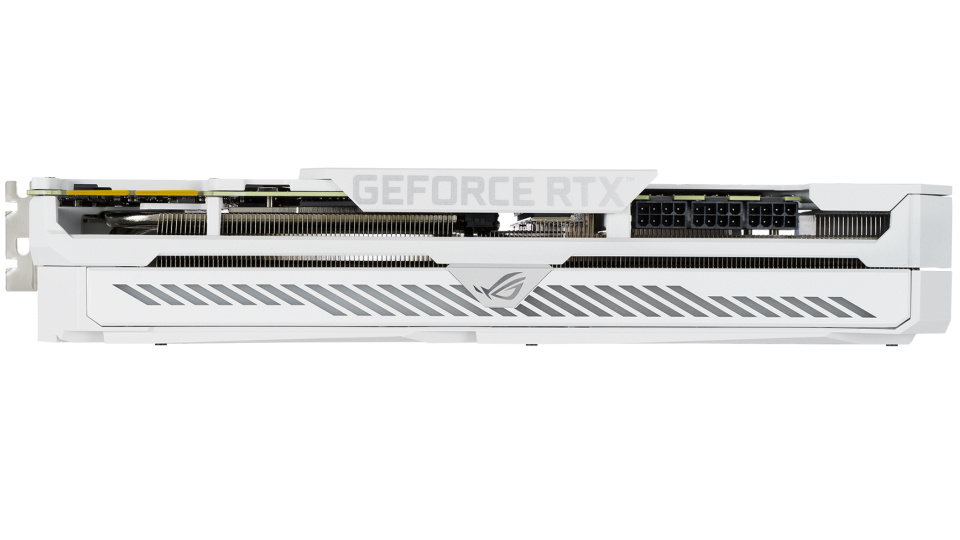 Even with the LED lighting off, the white colour makes this GPU very eye-catching

To keep thing cool under load the Asus Republic of Gamers team have used their new Axial-tech fan design, which is optimised for the new, larger heatsink that features more fins and surface area than last gen. The blade count is increased on all three fans, with 13 on the middle fan and 11 on the fans to left and right. The barrier ring on the side fans is slimmed down to allow for more lateral intake and to provide better airflow through the cooling array. The central fan’s extra blades and full-height ring provide boosted static pressure to blast air directly onto the GPU heat spreader. The rotational direction of the fan is fan with alternate, this reduces air turbulence inside the cooling array for another boost to overall thermal performance.

There is a silent mode that's ideal for using your PC for simpler tasks, the fans will also shut off completely when card power consumption is low and the GPU temperature falls below the 50 mark. The rear of the ROG Strix graphics card sports two PWM FanConnect headers that provide additional DIY flexibility. Chassis fans can be directly attached to the GPU and tuned with a curve that is based on CPU and GPU temperatures, providing extra intake or exhaust for demanding 3D tasks. A conveniently placed Dual Bios switch allows quick selection between “performance” and “quiet” mode for basic customization of the card’s default behaviour without software.

This graphics card is one of the most powerful in the world, and requires 3x 8-Pin power inputs

These ROG RTX 3090 also work with the Asus GPU Tweak II software suite for both custom and automated performance tweaking. With one click, the Gaming Booster function maximises system performance by removing redundant processes and allocating all available resources. The overlay also displays GPU clock speed, temperature, and VRM usage, and has GPU Tweak II controls, so gamers can choose a gaming profile and boost performance with just one click. The addressable RGB LED can be customized with Armoury Crate to easily match colours with other ROG system components.

Looking for the fastest graphics in the world - in white? Look for the new Ice White ROG STRIX RTX 3090 in Asus Graphics Cards today - it certainly stands out!

Looks great, too bad ROG's new case doesn't come in a white too.