UPDATE: The AMD Radeon 6000 series is now available for order (stock is limited.)

Wow! AMD just stole the show with the second half of their new product announcements, and this time the focus is on their new AMD Radeon RX 6800, RX 6800X and RX 6900X graphics cards.

The event started with some quick gameplay footage, then into awards from PC Gamer who have named AMD as the best CPU and GPU for 2019, then quickly continued into a short segment about the new Xbox Series X and PS5 consoles, and how they're both using AMD Tech.

Via Lisa Su "As successful as we've been with Ryzen, many of you have asked us to compete at the highest end of gaming GPUs as well, and today we're ready to show you exactly what we've been working on. I'm so excited to show you the Radeon 6000 series. It's absolutely the most powerful gaming GPU we've ever built. I think you'll be pretty pleased with what you see". Laura Smith, the senior director of Radeon Technologies Group, then took to the stage to talk in detail about the new RDNA2, highlighting that AMD wanted to create a technology that game developers could use across all platforms, console, PC, and beyond. Many features we're highlighted in the presentation, including a DirectX RayTracing.

The presentation continued with a simple performance comparison chart showing potential gains, then Scott Herkelman, the Vice President & General Manager of the Graphics Business Unit, took to the stage to get specific - and show what we've all been waiting for - the new Radeon RX 6800 XT graphic card!

The Radeon RX 6800 XT is designed to compete with Nvidia's latest, so AMD continued on to show the performance of the RX 6800 XT vs the Nvidia RTX 3080 in a range of 4K game titles includes Battlefield 5, Borderlands 3, Call of Duty: MW, Division 2, Doom Eternal, Forza Horizon, Gears of War 5, Resident Evil 5, Shadow of the Tomb Raider and Wolfenstein: Young Blood - with the settings used shown in the bars (so much ultra). 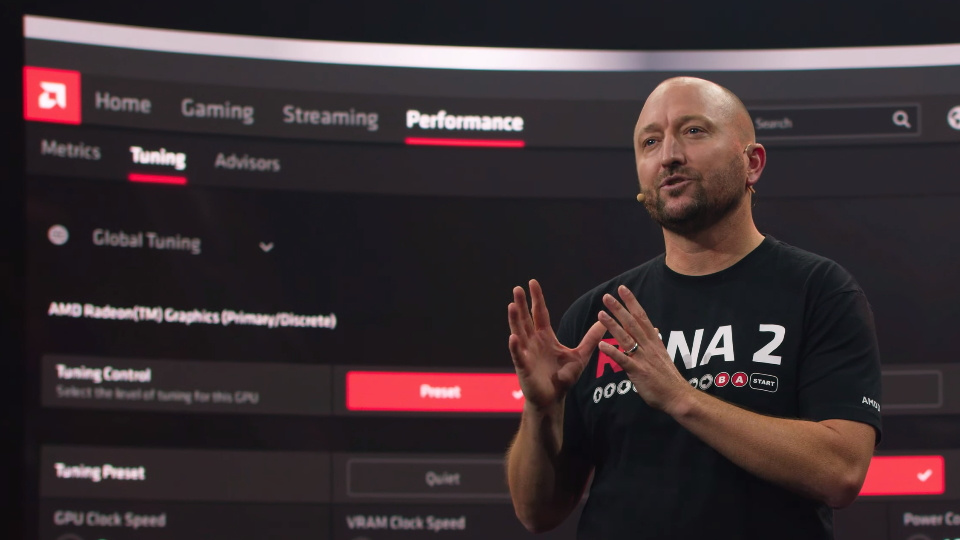 It's not just about 4K gaming though, Scott continued on to highlight the performance at 1440p, which is a very popular monitor resolution already owned by many PC gamers - showing the same game range and some incredibly good looking FPS counts - those with a 144FPS 1440P screens should be very very excited!

The presentation continued with highlights about software, building on their position as the makers of both the highest-end gaming AMD Radeon GPU, and AMD Ryzen CPU, and that pairing these two AMD components would enable even greater performance in a range of games.

But AMD wasn't done yet, they continued on to unveil specifics about another new graphics card - the RX 6800!

This is probably the most exciting of the bunch, but being just ahead of the Nvidia RTX 3070 launch day, AMD also compared it to the RTX 2080Ti. The show concluded with Lisa Su confirming that the GPU used in the previous Ryzen 5000 series reveal was, in fact, the RX 6800 XT - and that AMD had saved their best new product for last.

AMD didn't stop with the Radeon RX 6800 XT, they've made another GPU named the Radeon RX 6900 XT and it's a performance monster, with the chart comparing it to the just-released Nvidia RTX 3090 and showing it ahead in performance while highlighting the use of RAGE mode and Smart Memory Access mentioned above. So there we have it, amazing new graphics cards are incoming from AMD! We'll add in quick links to the products as soon as they release, and be sure to keep your eyes on the AMD Store for the latest!

Any updates on the 6900XT release here? Will PB get stock on the 9th?

Hey Ben, Thanks for being super helpful. are both models available? 6800 and 6800xt?

Thanks Ben! Exciting looks like an early morning for me ?

Would we be able to pick up in the morning after purchase?

It depends on the PB Tech store location, unlikely possible outside of Auckland. More details on delivery times comes during the order process, so you'll be able to see info specific to you.

Ah I see, living in auckland city so hoping I can snag one, just gotta pray...

If we manage to order a card at 3:01am tomorrow, how soon will we receive it? Will you only be accepting online orders for cards you have on hand in stock? Or will it be possible to order one at 3:01am and then be put on a (potentially long) waiting list?

Hi Michael, some RX 6800 (XT) models are in stock, others will release only as pre-order. If you get in quick enough and nab one the order (usually) ships next day. Please know that with many people placing orders at once, some will miss out on that day one stock and enter the queue for next shipment.

When is the next shipment?

Hi Ben. Will there be stock available in the Christchurch branch immediately? Or do I have to wait for delivery from Auckland just like with the Ryzen 5000?

Hi Machomp, the first RX 6800 (XT) with reference coolers will only be available online right away, with most options releasing as pre-orders. The second RX 6800 (XT) release on the 25th/26th (aftermarket coolers) should be much better, with stocks sending to stores ahead of release. It's still going to be tight at first, but strong supply going forward.

I dont have that hope.. as seems store days are gone these days

Hey Ben.. Really would appreciate mate on some transparency here as most recent launches are so bad and really staying awake till early morning and getting high BP(to me) is not worth a preorder where I am paying thousands which I can't use rightaway yet stayed awake to be just in a queue - maybe it's me. Anyways do something to show stock update as in if something is ready to order or something has been moved from ready to preorder. Last time I was caught on preorder as by time my order went through it went on ready to preorder. I would appreciate something if that's on stock to buy. On context - Just to avoid this for RTX3070 I did queued up at CL for that 2AM launch for a confirmed stock allocation.

Do we know roughly when these will be ready for Pre-Order? Was looking in to the RTX 3080's but if these are promising the exact same output with a slimmer price, this may be the way to go!!!

Hi Luke, right now it's 3am this Thursday for the RX 6800 (XT) reference cooler graphics card versions, with the aftermarket cooler designs from Sapphire/Gigabyte/Asus/MSi/Powercolor releasing a little later on the 25th November (timing TBC).

Awesome cheers for the reply!

Any idea on stock levels for the reference cards? Are they likely to sell out instantly? Some of us are wondering whether it is worth waking up at 2:50am or if we're only going to miss out anyway.

Hi Michael, I'll be visiting the warehouse to count stock ahead of this launch too and will post a message here with details on the day so everyone knows what's where.

You're awesome! Thanks so much for all your hard work, a real legend! If we do manage to order one at 3:00am, can we pick it up later that day and/or how long will actual delivery in to my hands take?