Gosh Playstation owners are a lucky bunch, first they get Spiderman locked in as a PS Exclusive, and now Seagate has some awesome new game drives too! Lot's of people saw these coming though, recently, Seagate has made a bunch of great limited edition game drives for consoles, with Cyberpunk 2077 and The Last of Us Part II being very popular new options.

Now Seagate are getting into the Marvel universe with four new game drives being teased that picture the incredible Hulk, Captain America, Thor and the Avengers headline team from the new game.

Hulk look amazing, with a classic comic vibe that works, looking mean in green and purple.

Thor on the other hand, looks to be diving in donning his popular short hair like in the Thor: Ragnarok movie, his hammer held high as he prepares to unleash his signature lightning strike.

Captain America has a series of jets soaring in formation behind him as he charges forward, with his shield at the ready.

The Avengers team game drive has a different art style from the rest though, with greater detail and colours used to illustrate the powerful heroes, Iron Man, Thor, Captain America, Black Widow, with stretchy Miss Marvel right in the middle. 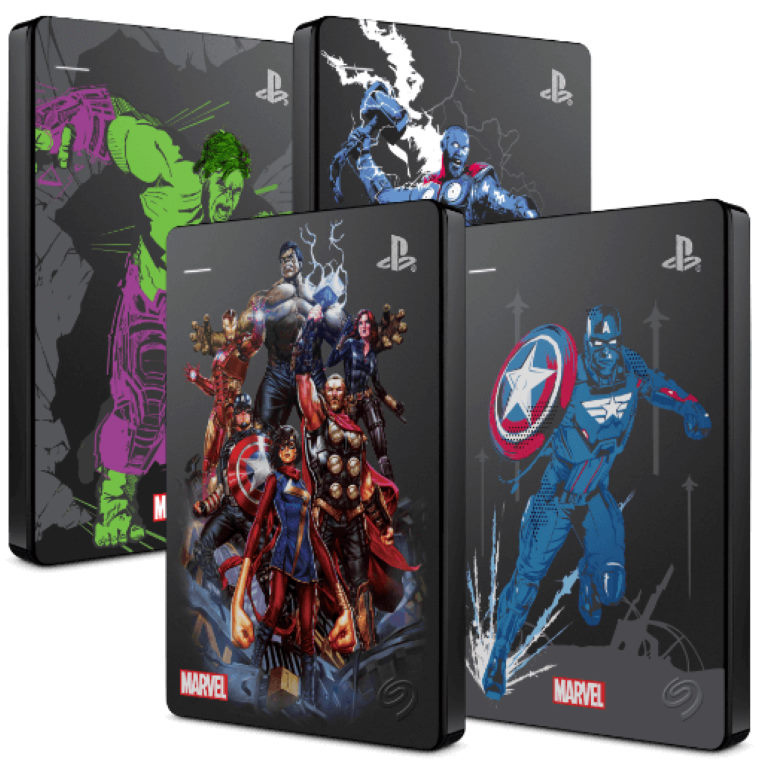 Built to use with Playstation with seamless installation, Seagate's latest special edition Game Drive is small and lightweight enough to slip into a pocket or bag.

Seagate Game Drive Essentials: - Install a massive collection of new and classic games with 2TB storage. - Collaboratively engineered for quick, seamless performance - Easy plug and play USB 3.0 connectivity - Game anywhere with travel-friendly portability - The iconic looking Avengers, exclusively for PlayStation - Portable plug-and-play drive connects to any PS4, PS4 Pro or PS5. It does not need a separate power adapter and with it you can store downloaded games, it’s just like a regular portable harddrive, but wayyy cooler looking and designed to work with consoles.

Do you dread clearing the game library just to make room for new ones? With a Seagate Game Drive, you can keep them all together and relive your favourite adventures whenever with fast, smooth performance.

With Marvel's Avengers game having just been released for PlayStation, Xbox & PC, and so many players all over the NZ teaming up to play as their favourite heroes, these new Game Drives are sure to sellout fast.

Check out the full range in the Seagate Store today!