How to install RAM in a Desktop PC

Today we'll be looking closely at some simple upgrades you can do for yourself to increase the performance of a Desktop PC. We do some things below which are not recommended, like mix-matching ram kits, just to show what happens when you do.

One of the easiest computer upgrades you can do for yourself is to increase your RAM. We've previously written about the benefits of doing this for PC that are used for editing photos and videos but the benefits can be felt in even web browsers like Chrome, which has quite the rep for eating up lots of memory with multiple tabs open so if you start to notice your computer is slowing down when you have a lot running, it's the perfect time consider this upgrade.

There are two ways to approach this, you could add more if you have RAM slots spare, or, replace the RAM with an entirely new kit. Looking at your motherboard inside your PC will let you know which option you'll be going with, as shown below with a range of different motherboards - whether it's two of four - the ram slots are usually on the right-hand side.

What makes RAM upgrades so easy is the plug and play aspect of the install, you won't need to hunt special cables or install the right program to do it, if it fits, it generally works :) The size of the slots has changed a bit over the years so your can't plug the wrong kit into the wrong slot. When shopping the sizes are easily identified by the ram that's currently in your system - namely DDR4, DDR3 (a bit older) and DDR2 (from the 90's!)

OK, so let's actually do an upgrade so you see exactly what's involved - we'll be using our own GGPC Hero GTX Gaming PC for the examples below as it's the best value entry level Gaming PC available, and with so many people already owning one - it's a prime candidate for future upgrades.

I understand that many people don't have a workshop, so I'll be doing this on a plain kitchen bench with some white paper on top. You can generally upgrade quite safely by first touching a grounded object (I touched the jug in the kitchen) but if you're worried about static you can buy special anti-static bracelets here, these clip onto the PC case your working on and are quite handy if you have to leave and come back thanks to the little dome clip on the wrist.

Removing & Installing RAM in your PC

Let's begin by first opening up the PC. for me this is via the side window panels - lay the PC on its side first with the window facing upwards. You'll see the thumb in the four corners, give these a twist to the left (the rule is righty tighty - lefty loosey) and the panel will lift off. The motherboard fitted with RAM, CPU, GPU and more. RAM is here, just to the right of the CPU cooler

This latch can be on just one side, or both, on this motherboard we find that the top can be pressed to allow for the removal of the RAM inside. 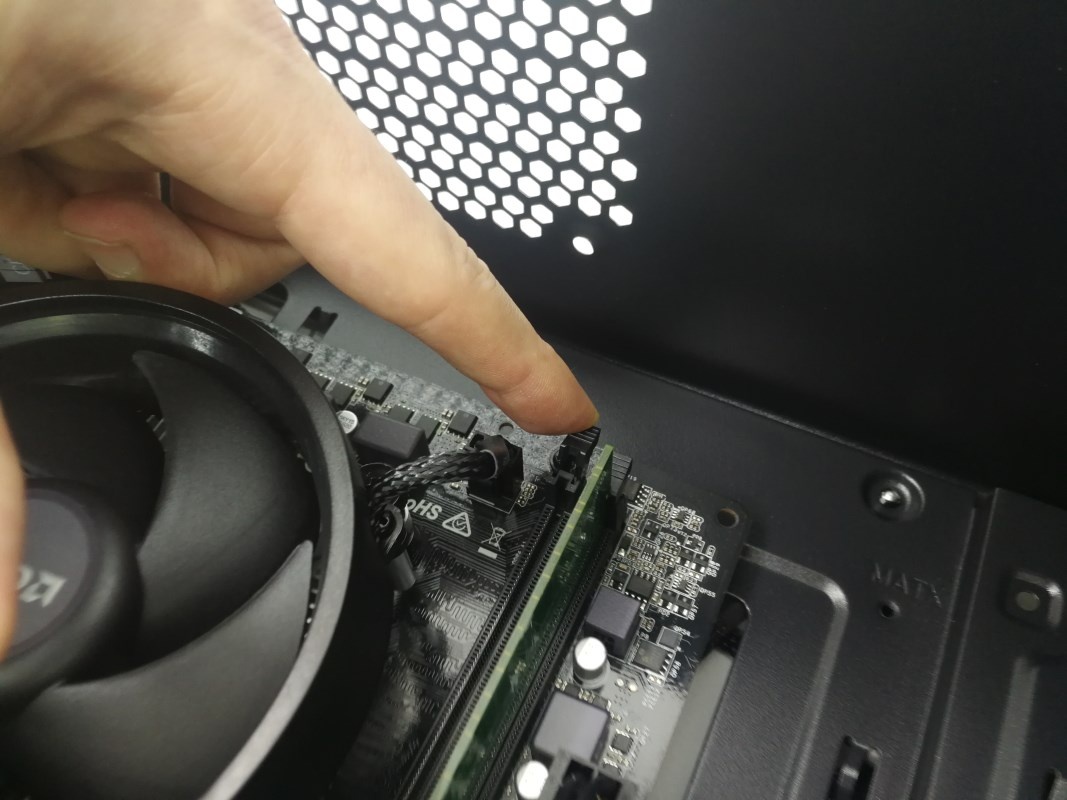 The RAM slot has a latch, press down to release it RAM all removed, slots ready for new RAM to be added

Flick the latch and then give the RAM a pull upwards from the top and it'll slide out rather easily, if it doesn't check the latch is fully depressed, push down will often cause the ram to pop up a little on the latch side signalling it's ready to be removed. 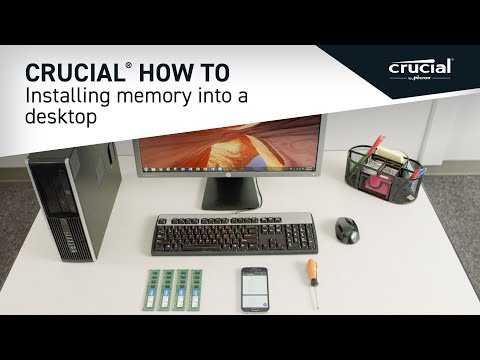 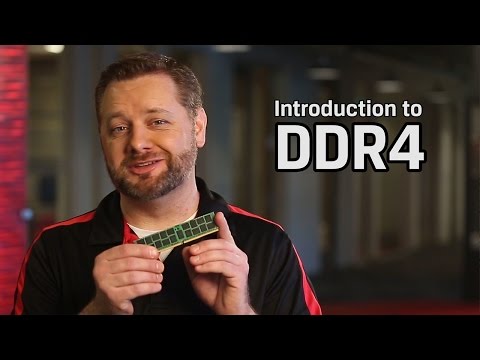 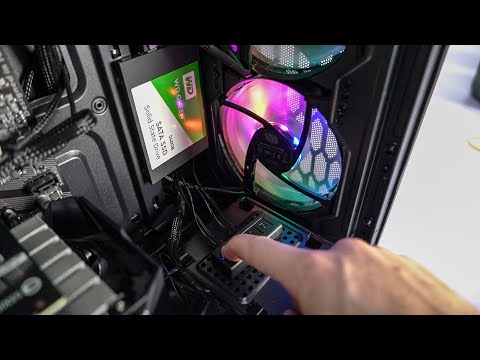 How to find the correct RAM for your PC

Now that you know where the clips are, and have removed a stick of RAM from your PC, we can use that to find more. You can search for MFC codes on the PB Tech website

Now that the RAM is out we can clearly see the little numbers on the side, typing this into the PB Tech website I can quickly find the exact ct8g4dfs8266 kit - making this the best option for buy for the upgrade.

However, that perfect match isn't 100% needed for the upgrade, and sometimes you'll be unable to find the exact kit used in your PC.

To demonstrate this we'll grab a first generation GGPC Hero (from a few years back) which used DDR4 sized RAM but instead of this being 2666MHz like the current version, it was 2133MHz (pretty fast at the time!) and it used a 2x4GB kit rather than the current 1x8GB. Three different RAM sticks, at different speeds, all of which can fit With both fitted the system still works just fine, however, the faster, newer ram will slow itself down to match to the speed of the other kit, as shown below in the image to the right both my RAM sticks are now running at 2133Mhz, but it does work, and I've got 12GB now! 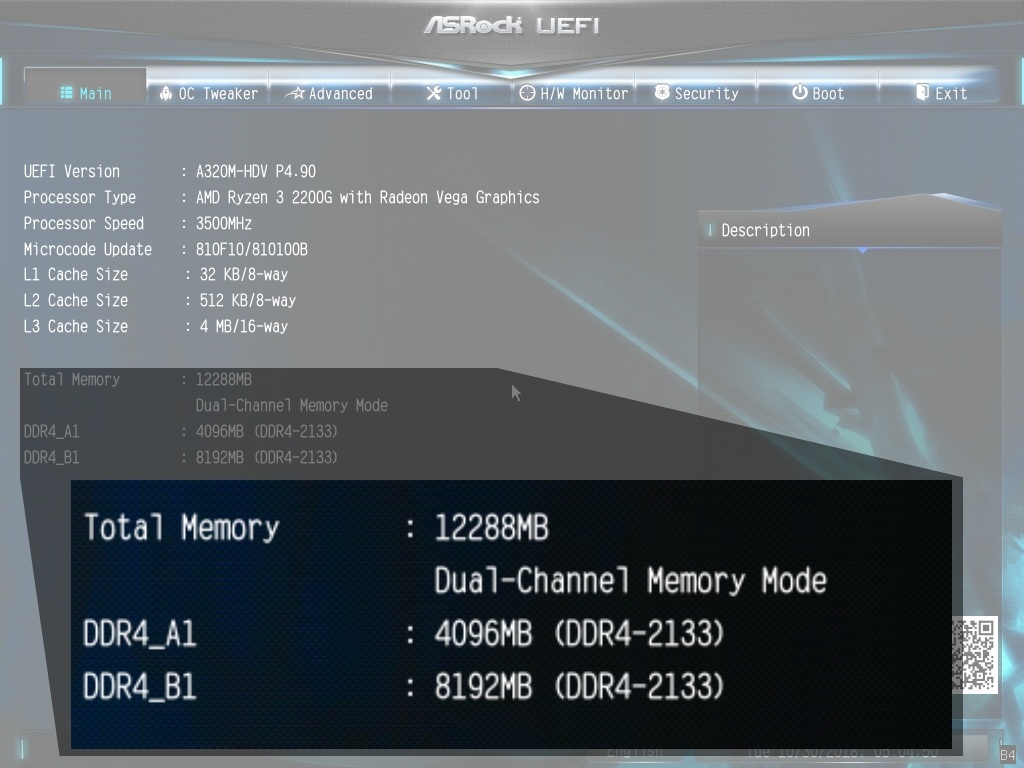 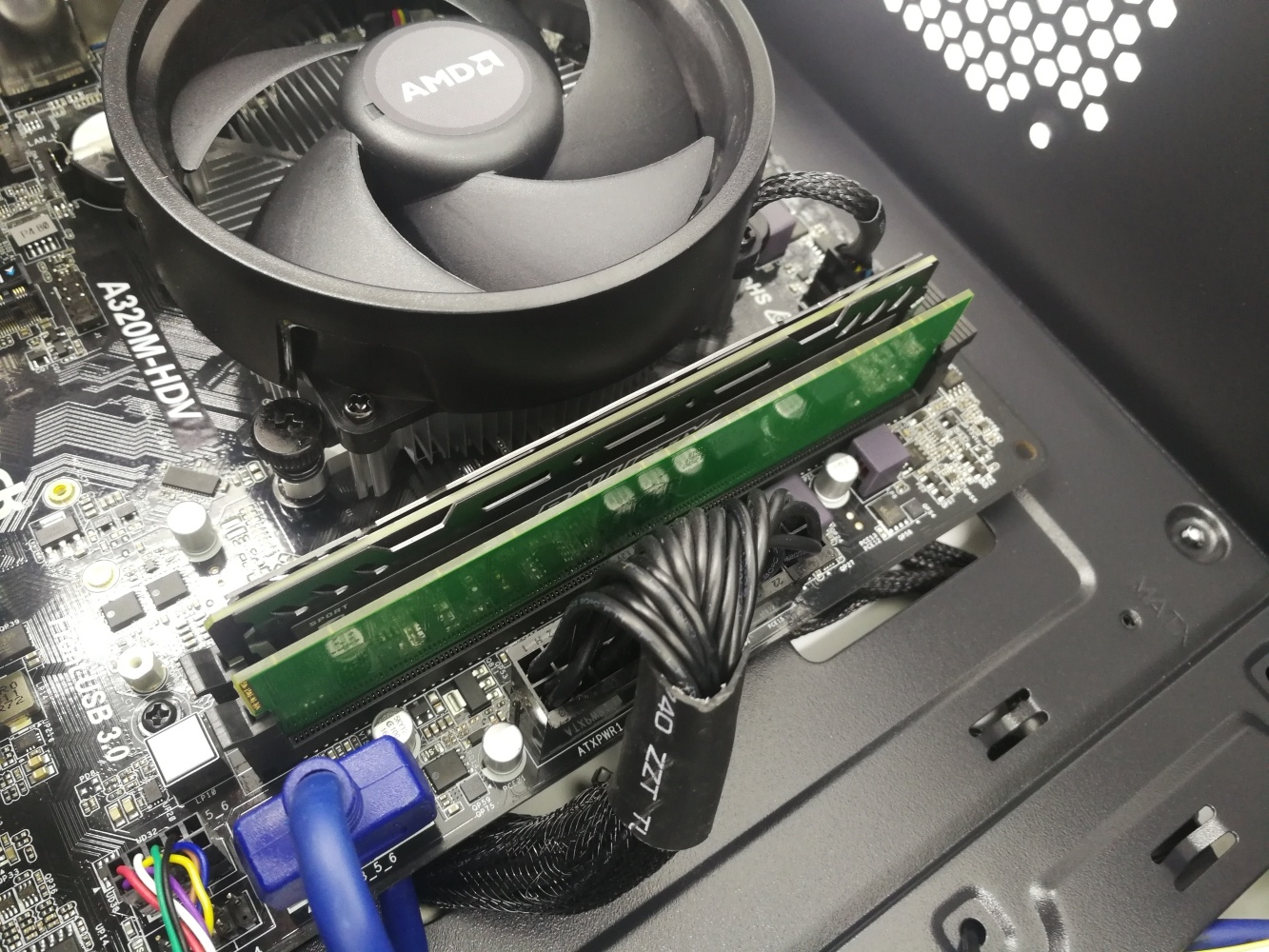 Now with an a faster, newer 8GB RAM stick mix

For this we've used a better RAM stick that, while it still runs at 2666MHz, has a different CAS latency & timings - you can read more about RAM CL if you want to know more, and we've also written a more in-depth article on timings.

That aside for now, we can see we now have 16GB of RAM running at 2666MHz, if you're wanting to take a screenshot in BIOS like we have you first pop in a USB flash drive, then when you push F12 this will save a screenshot to the USB stick.

For checking your RAM while on the windows 10 desktop we first press start, then typed "DXDIAG" into the search bar to bring up the little window shown on the right. This also shows my exact CPU being used - which is important for the next upgrade in which we'll do a full RAM kit replacement. 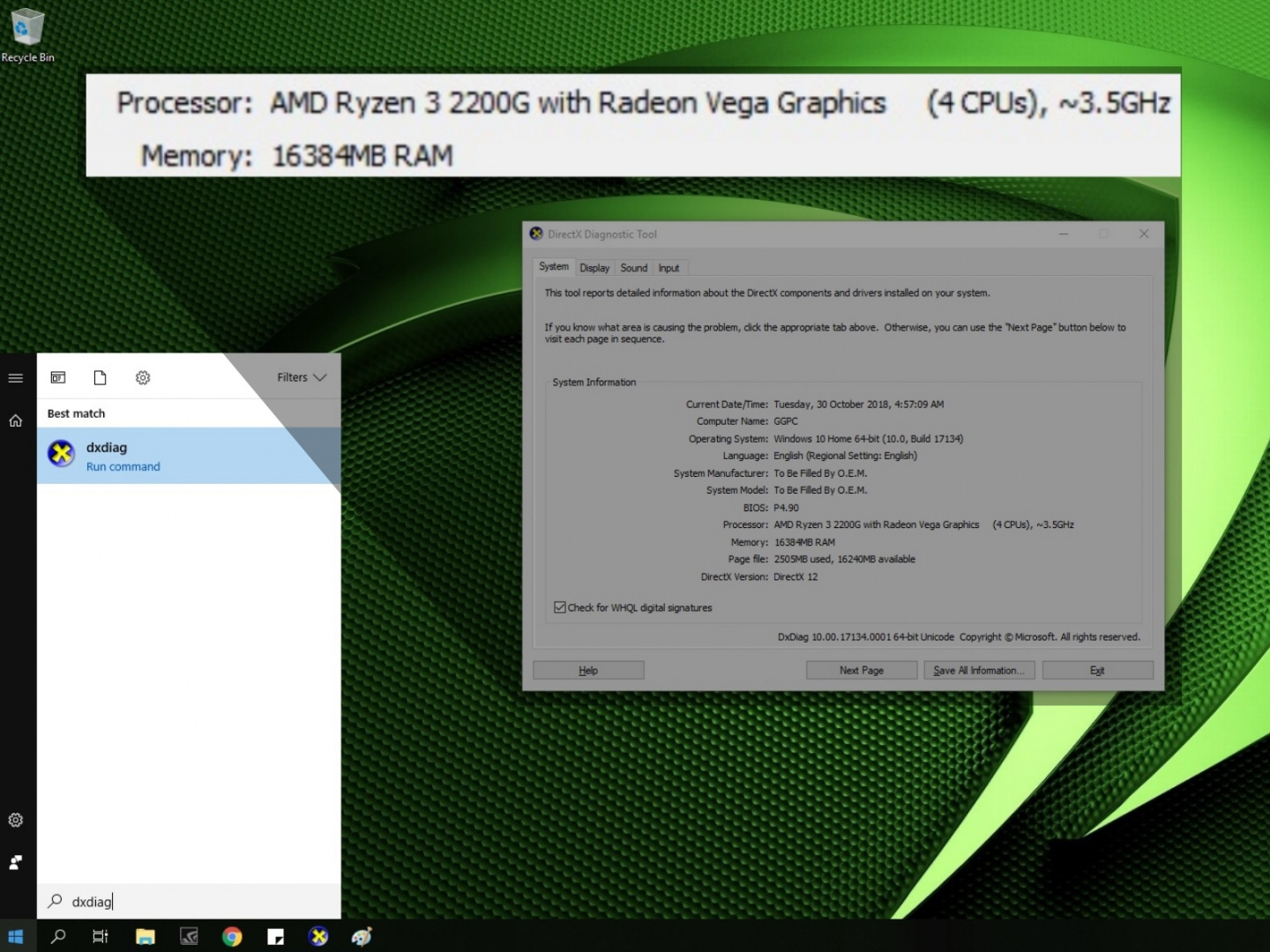 Ah, that was good fun! Now let's do a full replacement and pop in a new RGB Ram kit, replacing our existing kit. This is the considered to be the best upgrade path with both sticks of RAM perfectly matched.

As this is a completely new kit, and it won't be affected by the previous RAM fitted in the PC. Now is a good time to quickly talk about choosing the perfect speed RAM for your PC upgrade. This is done by looking a little closer at the exact motherboard model you are using and checking the RAM speed it supports. This can be done the same in the same way as we checked the first RAM above, by typing model number into the PB Tech search bar - in this case, mine is named a320m-hdv and when I look at the specification information for that model, I can see that with a Ryzen CPU fitted I can support up to 32GB of 3200MHz DDR4! Your motherboard and CPU determine how fast your RAM can go Some kits light up with configurable LED lighting

Popping in the RGB RAM kit is exactly the same with no additional cables to connect, the extra LED can sometimes be made to change colour depending on temperatures, CPU load, network speed and more so it can be quite useful.

If you're not filling every slot on the motherboard the placement of your RAM is actually important, you can find this information in the manual for your motherboard but generally, it's 1 stick in slot 4, a second in slot 2, a third in slot 3 and a fourth in slot 1.

We hope this article helps you to upgrade your Desktop PC with more RAM, because having more is great for a more responsive PC experience!

How to keep your PC dust free!