This is part of a new Drone series at PB Tech, we’ll be adding to this article with more as we test out a range of models from our Aerial Imaging Drones category.

Starting things off we’ve got a great drone from DJI, actually, this is the most recent drone they’ve released and thusly it’s packing some of the most cutting-edge technology like flight assistance tools previously only seen in much larger, more expensive drones.

The DJI Spark really is a remarkable little drone package, it’s small enough to take just about anywhere and, most importantly, flies incredibly well while packing in an excellent camera to capture both photos and video.

Within the SPARKS main box you’ll find another travel box which can be used to safely transport your drone, it’s small, measuring in at just 20cm x 20cm with a depth of just 7cm making this one able to fit in most backpacks or messenger bags with ease.

Get the APP (before you buy!)

The DJI Go 4 App can be downloaded for iOS and Android users, getting this now is a way of ensuring your device is compatible before you buy the drone. You’ll also be able to check out a special tab within called “SKYPIXEL” in which other drone users share their favourite photos and also enter regular competitions using video footage captured during flights.

With that done and device compatibility assured you can now buy your DJI Spark.

When you first get your drone home you’ll want to get it charging immediately, this is important not only because you want to fly it - but also so you can do the DJI software updates for your drone as soon as possible (installing these require the drone to be charged up) - giving you access to the latest features. You’ll find the micro USB charger cable within a little black box on the side of the travel box, this connects to the back of the drone just above the battery pack and is hidden under a protective tab that’s marked with “SPARK”, you’ll also see the slot for inserting a microSD card here, but more on that later.

Pairing your phone with the drone is done via a unique WiFi network from the drone itself, this can be found on the SPARK drone by removing the battery pack (two little black pull-pack clips on the side of the battery release this), on the drone you’ll see two QR codes - the larger one has details for both the Wifi SSID (name of the wireless network you should connect to) and the unique password for this - quickly snap a picture or jot down that password - you’ll need it soon, the SSID info isn’t quite as important unless there are already multiple drones in your area - you’ll see this appear in your smartphones “available Wifi network list” once the drone is turned on.

Powering up the SPARK is done by holding down the little rectangle button just under the USB connection we used to charge it, you’ll need to depress this button for 3 seconds to turn on the drone, just tapping it gives a quick indication of battery life. You’ll notice when the drone is on, internal fans seemingly hum with excitement and little lights on each rotor arm will start to light up - fun fact, these lights are actually indicators of the front and back of you drone to help identify the direction your drone is facing, they greatly assist in flying if you’re looking at the drone rather than the screen :)

The first thing you’ll want to do is get familiar with the camera controls so you can save that flight footage directly onto your phone, the button for this has a large green arrow pointing to it in the picture below - the reason we point this out is that it disappears once you've placed your thumbs on the control points :) 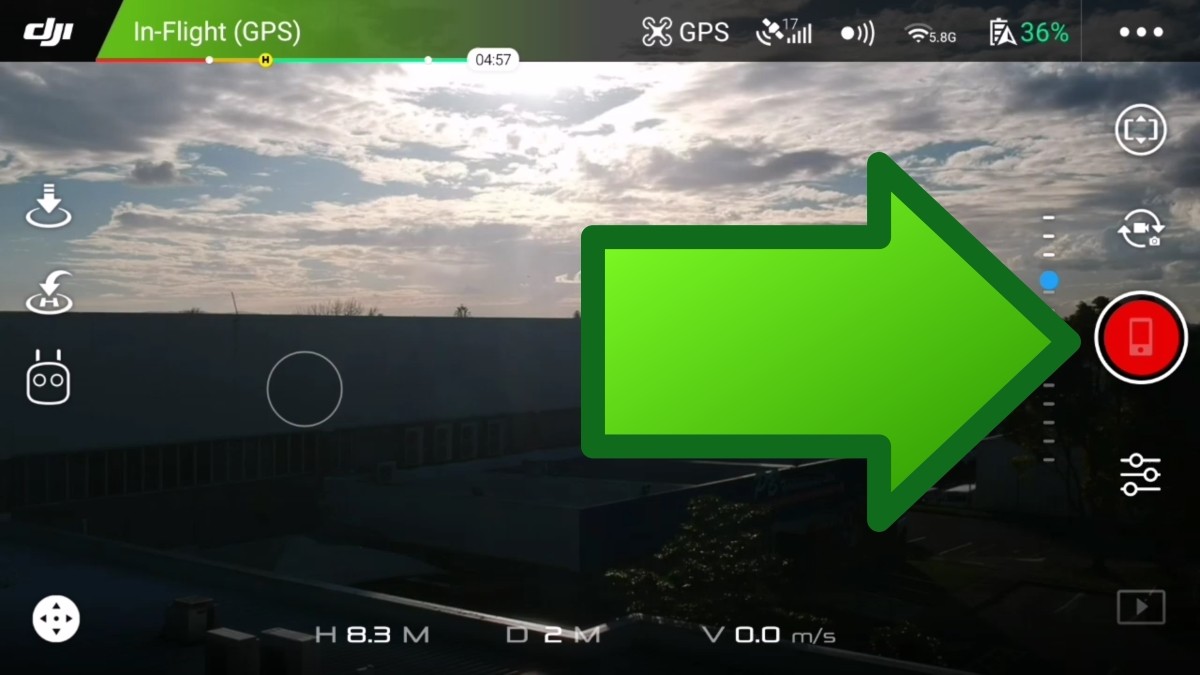 The recording quality for SPARK is excellent but you can get better footage by recording directly to a MicroSD card if you’ve put one into the Drone (right beside the charging port). It will also record audio which is captured from your smartphone microphone, not the drone itself - so this is really only useful for adding a little commentary :)

With all the safety features built into this Drone, you can really jump right in and get flying with your new friend. We recommend finding a nice spot with a bit of distance between the drone and objects in the area, the safety sensors will alert you to any concerns the drone might before take-off so don’t overthink this - the kitchen table, carpark, and backyard have all worked for us :) Taking off is as easy as sliding that little slider up - the drone will then hover waiting for you to take control, take off a land a few times to get comfortable with it - practice makes perfect.

When you want to start flying around simply touch your thumbs on the little circles on screen and beneath them two controllers will appear, your left thumb is used to go up and down, and also turn left and right. Your right thumb will move you backwards and forwards, and also strafe left and right. Will the safety on you might find that the drone stops itself and hovers even when your pushing forwards, this is because it has detected an object in the area (this could be a tree, wall or even you) and won’t let you get closer to it - simply back off a bit and try another path while you get used to the controls. Just remember that while the drone will generally stop itself from running into objects it won't get out of the way of things (like kids) that collide with it!

Before turning the safety OFF and really flying - things to know!

Range - using the drone from your mobile device gives you a range around 20 meters, and this is affected by line-of-sight. So if we try to fly around our house, checking the gutters perhaps, the moment we lose line of sight with the SPARK our connection bar will start turning orange/red to signal poor connection and direct control may be lost. Don’t panic, the Drone will stay where it is and you’ll be free to adjust your position for better signal, resuming your flight when you’re back in the green :)

Wind - The SPARK holds up remarkably well even in the wind, though you won’t be able to move as fast as the stabilization is working hard to keep the drone in position.

Smashing into walls - While we don’t recommend this, the durability of the drone did need to be tested so we turned the safety off and flew into some walls - both front-on to endanger the camera and side on (for science!) - the rotor blades are designed in such a way that they will pop out from the unit in order to save themselves and even though our main body was scratched our original blades survived (there is also a spare set included with the Spark, just in case)

Spare battery - you get around 16 minutes of flight time on a single battery at full charge, when there is around 1 minute flight time remaining the drone will signal that it needs to land. We tested what would happen if this request was denied and got an addition minute more before the drone slowly set itself down.

DJI Controller - Not only does this device make flying the SPARK that much easier, it also extends the control range for your SPARK, up to an incredible 2KM to be precise! The controller itself is pretty cool with two fold-out aerials on top and another fold out section on the bottom that holds your phone.

FPV Immersive Goggles - Immersive indeed, don this headset and treat your eyes to a pair of 1920x1080 HD screens, it’s also got a very fancy head tracking feature enabling you to look at the world from above. Combine these with the SKY controller above and you’ve got a seriously cool kit worthy of a professional drone pilot.

Multiplayer - an introduction to Drone Racing.

This has become one of the most entertaining ways to spend time with the Spark, you won’t actually need to have multiple drones to enjoy this activity with friends either, the “time trial” turn by turn method is great fun for all!

The key to this is creating your course, and the trick here is to keep it simple at first. Start with the agreeing on where the Start/Finish line is, from there plotting out and agreeing on a couple of landmarks to fly around (a low bush is perfect for this, those sensors that stop you “flying into walls” can also make it tough to fly around trees), and in which order in which each landmark should be passed before racing for the finish line.

Time trial can be recorded with player two on the stopwatch (we use our phones for this) but if you and your mate both have a Spark Drone then this becomes a straight up race, with the winner being whoever crosses that finish line first!

Top Camera Drones for Beginners in 2022

All work and no play? 3 alternative uses for your drone